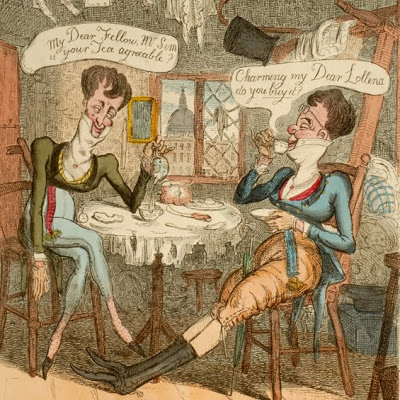 The clothes-obsessed dandy and dandyism phenomenon first appeared in the 1790s, both in London and Paris. In period vernacular, a dandy was differentiated from a fop in that the dandy’s dress was more refined and sober. But not for long. 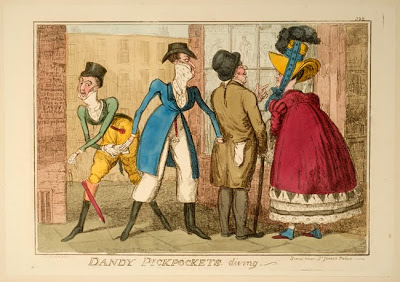 Dandy Pickpockets Diving.
During the Regency period in London, dandyism was a revolt against  the extravagance and ostentation of the previous generation, and of sympathy with the new mood of democracy. It became, however, a competitive sport  and this revolt against prior tradition became a revolting development.
Immaculate personal cleanliness, crisp and clean linen shirts with high collars, perfectly tied cravats, and exquisitely tailored plain dark coats (similar in many respects to the “macaroni” of the earlier eighteenth century) became the fashion, epitomized by George Bryan “Beau” Brummel (1778-1840). Imitators  followed  but  few possessed  Brummel’s sense of panache. Many, if not most,  over-reached. 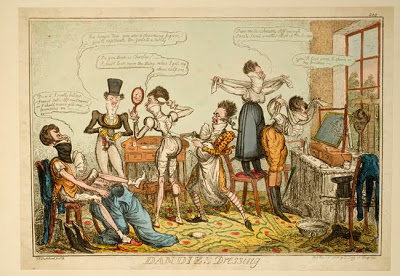 Dandies Dressing.
Brummel also cut his hair short and was in the vanguard establishing what would evolve into the modern men’s suit of jacket and trousers.

Beau Brummel may have set the standard for elegance and style but not every man aspiring to Brummel’s flair succeeded. The style soon went over the top. What flowed naturally and unselfconsciously from Beau Brummel all too often became affectation and pretension in others and it was this class of dandies that became the subject of caricature and ridicule. 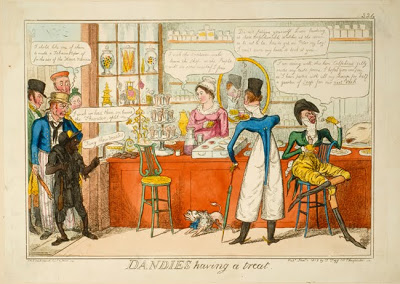 Dandies Having a Treat.
They were, indeed, ripe subjects for satire and rich grist for caricaturist Robert Cruikshank (1789-1856) and his celebrated brother, George, both of whom sharply drew the connection between dandyism and buffoonery into the sharp burlesque it had become by the time these engravings were published, the Regency era’s's end.. George, however, didn’t want to have anything to do with at least one plate in the series. In the lower left corner of Dandies At Tea, over Robert’s engraved name, he inscribed and signed: â€œNot any of it by me.â€ 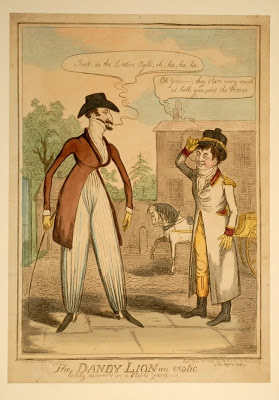 The Dandy Lion.
During 1818-1819, Robert Cruikshank produced a series of hand-colored engravings lampooning dandies and dandyism. Issued separately, the engravings scattered, and as far as my research can determine only the British Museum possesses a complete suite. Yet at some point during the nineteenth century a private collector had them bound into an album. That album passed through my hands not too long ago. and yes, it’s a dandy one, devastatingly sharp. If these engravings, originally published in the singular, were a steady drip of Chinese water-torture, their collection into a single album is a tsunami drowning the dandy in his overwrought and preening flamboyance. The reputation of dandies takes a mortal hit. 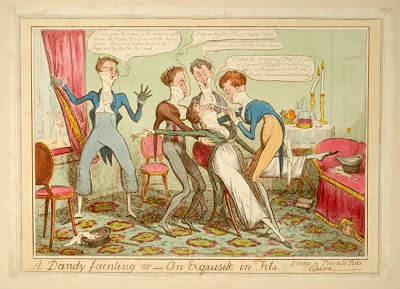 A Dandy Fainting, or An Exquisite in Fits.
The dandy’s place in Americana is enshrined in the phrase Yankee Doodle Dandy, which originally appeared in the classic song Yankee Doodle, and referred to dandies and “macaronis.” When the British used the term in reference to Americans it was sarcastic commentary that ridiculed the unsophisticated hayseeds we were perceived to be. In concert with the dandy’s origins in the fashion of the working-class and in the spirit of democracy, Americans proudly embraced the joke and threw the laugh back at the British. It is exactly why Yankee Doodle stuck a feather in his cap and called it “macaroni.” 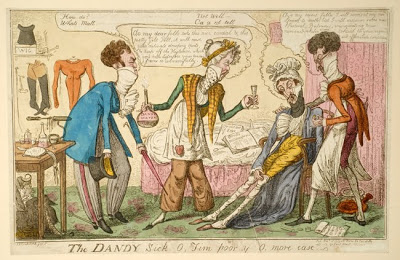 A Dandy Sick.
I’ve found no evidence of these engravings ever being formally collected and published in a separate volume. This singular album appears to be the only effort to preserve the suite between covers. 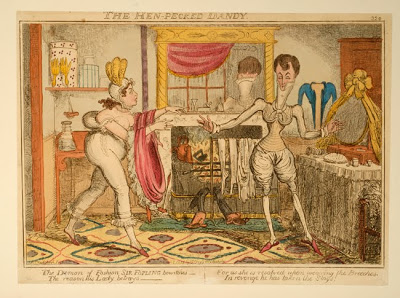 Scholars have written extensively about the Dandy fad and phenomenon but none have commented more incisively than Cruikshank with his artist’s pen and ink in these twelve plates. 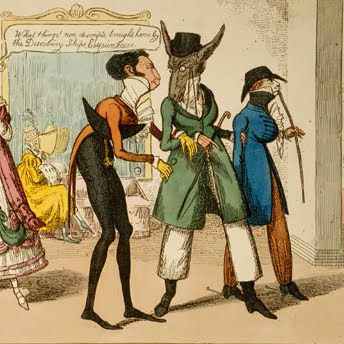 Comparative Anatomy – Or, the Dandy Tribe. 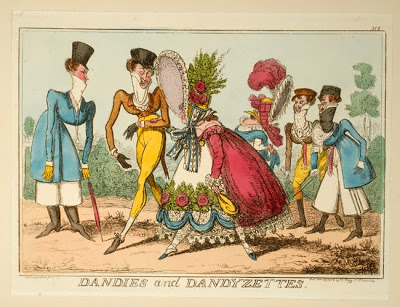 Dandies and Dandyzettes.
The dandy craze died out but periodically returns, often manifesting itself as rock n’ roll fashion. In the early-to-mid-1960s, Carnaby Street designers ruled Britannia by updating the Dandy; their creations became all the rage for rockers; the trend and period, in retrospect, might be characterized as fop-rock, which reached its apotheosis with Elton John’s burlesque of it; the Cruikshanks would have smiled in recognition.

Beau Brummel, because of his extravagances, had to flee England to avoid debtor’s prison. He died in Caen, France, wallet and wardrobe impoverished, a sad death for the Dandy king.
__________

A series of separately issued, first-state engravings, here collected. Folio (16 x 12 in; 410 x 305 mm). Twelve hand-colored engraved plates mounted on stubbed heavy stock. Plate I (numbered 317) is inscribed and initialed by George Cruikshank in the lower left corner over Robt. Cruickshank's name: "Not any of it by me."

Latter-day dandies may wish to visit Dandyism.net for news, information, Dandy-related articles, and a handy test of Dandy knowledge.
__________