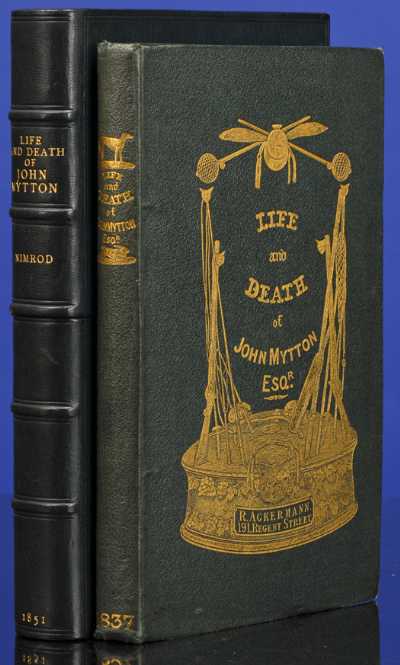 What do you call a 175 year old copy of a book that looks exactly as it did on the day it was published, completely untouched without any sort of restoration at all?

I call it an astonishment.

But, beyond the wild-tale,Â  it’s the night scenes in aquatint engravings by Henry Alken and T.K. Rawlins that will make a lasting impression upon readers of Memoirs of the Life of the Late John Mytton, Esq. (1837) by Nimrod, the mighty hunter otherwise known as C.J. Apperley (1777-1843), British sportsman and sports writer.

“This is not a work of fiction, for John Mytton, a rather inglorious character for a biography, was a hard-living, hard-drinking country squire of Halston, Shropshire, capable of the utmost physical endurance, and ready to accept any wager to walk, shoot or ride against any man. Many of his feats are recorded and graphically delineated, including the climax of his folly in setting his nightshirt on fire to cure a hiccough (Martin Hardie). Kids, don’t try this at home.

John “Mad Jack” Mytton, born into comfortable circumstances, attended Westminster School. He was expelled a year later for fighting. He went to Harrow. He was expelled three days later. He had tutors. He tormented them with practical jokes; he once left a horse in one’s bedroom.Â  Despite poor academic achievement he was accepted into Cambridge. He brought 2,000 bottles of port along to fortify him for study. He left before graduating because he was bored.

He went into the army and devoted himself to gambling and drinking. When he turned twenty-one he came into his inheritance. Then the real fun began.

He decided to stand for Parliament. His campaign platform was, apparently, Vote for me and I’ll give you a Â£10 note. He won the election. But he found politics boring and only attended Parliament once, for thirty eternally excruciating minutes. He declined to stand for re-election.

In 1832 he thought he’dÂ  give Parliament another shot. When the polling results began to be counted he quit the race when it was clear he was going to ignominiously lose. The fact that he had gone into exile to avoid debts may have had something to do with it.

The straight life cramped his style, which, at this point, centered upon horse racing and gambling, and, oh yes, drinking. About that wager he made and won: he rode his horse into the Bedford Hotel, up the grand staircase and on to the balcony, and jumped, still a-saddle, over diners in the restaurant below and then out the window and onto the street.

He was cuckoo for fox-hunting and did so no matter the weather. In winter, caught up in the thrill of the chase, he would strip naked to continue the pursuit. He enjoyed arising in the middle of the night and, buck naked with only his gun to keep him warm, would go out, ambush ducks, and return to bed.

He was, as must now be apparent, a marinated, extravagant thrill seeker. He was hell in the carriage driver’s seat, the shortest, most inconsequential ride a feral dash to the finish line. He once invited a parson and doctor to dine at his home one evening. He dressed himself as a highwayman, and, face disguised, rode out and held them up at gun-point, calling “Stand and deliver!”

The list of his eccentric and scandalous behavior is long. We will gloss over the time he rode a bear into a dinner party, and dog-fought a mastiff.

Money ran through his fingers like water. His inheritance went down the drain. He died in debter’s prison.

In its review of Memoirs…Â  the Literary Gazette contrasted Mytton’s promise with his sad end:

“. . .heir to an immense fortune, gifted by nature with a mind susceptible of noble cultivation, and a body endowed with admirable physical powers with the wretched drunkard who died in a gaol at the age of thirty-eight, a worn-out debauchee and driveling sot” (Literary Gazette, review of Memoirs).

“. . . Did the late Mr Mytton really enjoy life amidst all this profusion of expenditure? No. He lacked the art of enjoyment. He was bored and unhappy. There was that about him which resembled the restlessness of the hyena. A sort of pestering spirit egged him on” (Nimrod).

“When Lockhart said of ‘Nimrod’ that he could ‘hunt like Hugo Meynell and write like Walter Scott,’ he was doubtless excited into exaggeration by the pleasure of having hit upon a man who could write of sport without the vulgarity of Egan. ‘Nimrod,’ whose name was Charles James Apperley, was a man of education, a country squire and a genuine sportsman. Loss of means turned him to literature; he contributed articles on sport to The Sporting Magazine, The Quarterly Review and other journals; but is best known by his two books, The Life of a Sportsman, and Memoirs of the Life of John Mytton, both of which were illustrated with coloured engravings by Alken…

“Memoirs of the Life of John Mytton appeared as a book in 1837, a portion of the work having been printed in The New Sporting Magazine in 1835. It shows a difficult task performed with fidelity and tact. Apperley had been Myttonâ€™s neighbour in Shropshire, and had extended to him all the care that was possible when both were living in Calais in order to avoid their creditors. Apperleyâ€™s task was to write the life of a man who, while he was one of the most heroic sportsmen that ever lived, was also drunken, diseased and insane; and he performed the task with admirable judgment” (Cambridge History of English and American Literature, Volume XIV.Â The Victorian Age, Part Two, VI.Â Caricature and the Literature of Sport).

“A most valuable and important book for the sporting life of the period, aptly described by Newton as ‘a biography of a man that reads like a work of fiction’” (Tooley).

And this is an unsophisticated copy of a book that looks like a work of restoration, an under-the-bed-in-a-box-and-forgotten-OMG example. Tally-Holy Mackerel. 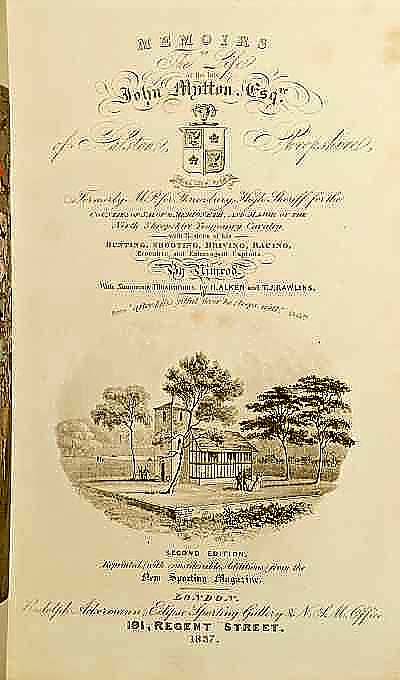 [ALKEN, Henry, artist]. NIMROD (pseud. of C.J. Apperley). Memoirs of the Life of the Late John Mytton, Esq. Formerly M.P. for Shrewsbury, High Sheriff for the Counties of Salup & Merioneth, and Major of the North Stropshire Yeomanry Cavalry. With Notices of His Hunting, Shooting, Driving, Racing, Eccentric and Extravagant Exploits By Nimrod. With Numerous Illustrations by H. Alken and T.J. Rawlins. Second Edition. Reprinted with considerable Additions from the New Sporting Magazine. London: R. Ackermann, 1837.