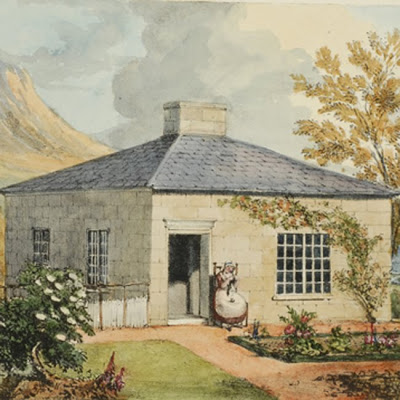 One of the rarest British color-plate architectural pattern books of the first half of the nineteenth century, Novel Designs for Cottages, Small Farms & Schools presents architecture as social engineering and provides the genesis for the company town.

It was produced by architect John Hall, Secretary to the Society for Improving the Condition of the Labouring Classes, and author of 1824′s A Plan for the Abolition of the Present Poor Rates: and for Effecting a Grand Moral Improvement in the Lower Classes of Society, with a View to the Ultimate Annihilation of Pauperism (Goldsmith 24266). Novel Designs… won  Hall  a grant of Royal Letters Patent for the designs and plans therein.

“To The Nobility and Gentry Land Owners of Great Britain and Ireland, These Designs are very respectfully dedicated by their most Obedient Humble Servant JOHN HALL. July 1, 1825.” 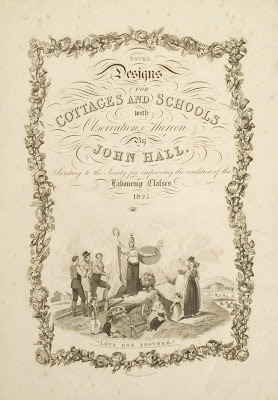 ”Showing how easily the situation of the Labourers may be improved and the Education of their Children be rendered independent of Public Contributions and Subscriptions.”

The book opens with five designs by Hall to produce economical housing of unusual, rather extraordinary quality for land owners to rent to their workers: 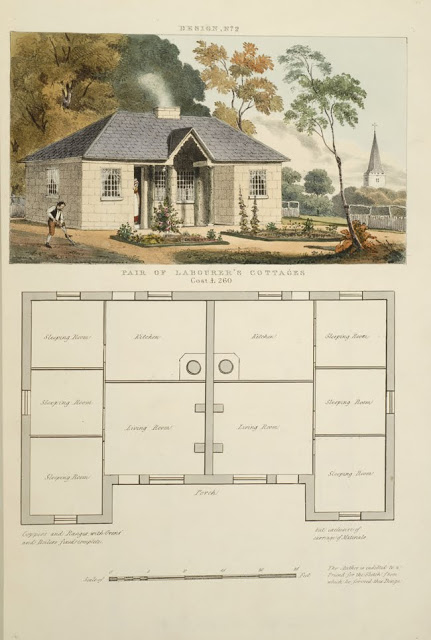 “The object is an increase of comfort and happiness to the labouring classes: – an encouragement towards the attainment of a true independence, which, while it makes them superior to idleness, intemperance, and parochial relief, will tend to lessen their vices, and create a pleasurable observance of all the duties of society. In short, an inducement to preserve health by the exercise of cleanliness, delicacy, and industrious morality: the true Mens sana, in corpore sano!”

Hall provides details of the costs to the landlords and subsequent costs to the worker (including food bought from the Landowner) with a wife and four children for a house comprised of well-proportioned, high-ceilinged Living Room, Kitchen, and three Sleeping Rooms “to enable the parents, boys and girls to sleep separate” – most unusual at the time – each house to sit upon an acre and a quarter of land: 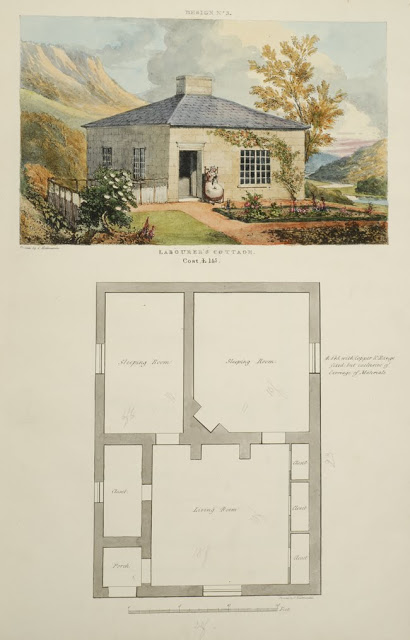 “A garden and a little land must be added, on which the spare time of the family may be beneficially employed, and inclining them to raise their thoughts in thankfulness to their Creator for the bounties they enjoy.”

By Hall’s calculations, the landlord will earn eleven shillings per annum in profit after recovering costs. 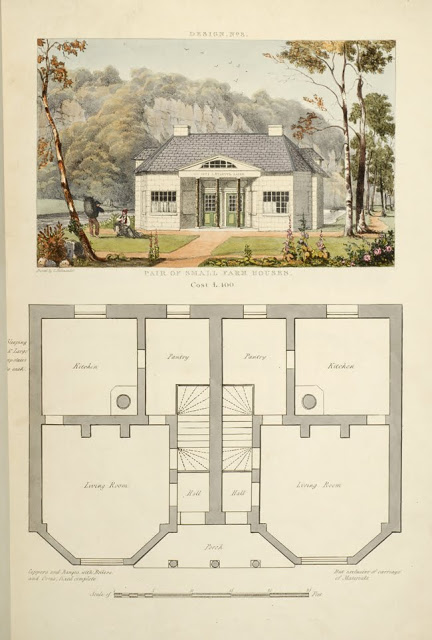 “Wherever the plans for labourer’s cottages are adopted, the establishment of small farms will speedily follow; for as the best conducted labourers will be selected as proper tenants for the cottages, so, in a short time, will the superior cottager be chosen for the tenant of a small farm.” 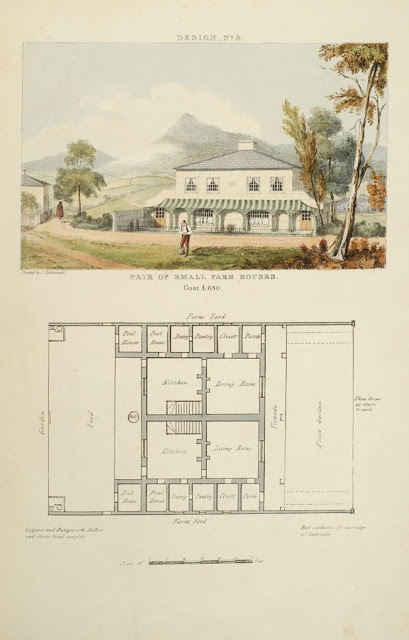 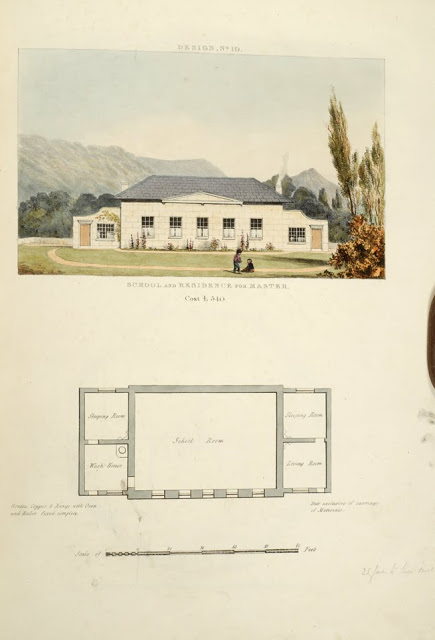 “Suppose an establishment, upon the plan given, for boys, girls, and infantsâ€¦the whole upon ten acres of land, to cost Â£5000. Accommodation would then be afforded for three hundred infants, and six hundred older childrenâ€¦To make the elder children more efficient members of society than the children of labourers can become by mere intellectual instruction, only half their time must be given to reading, writing, and arithmetic, and the other half must be employed on the land attached to the establishment, in the workshops, and in the houses of the teachersâ€¦and [in] all those useful employments which will enable them, when they leave school, to become valuable servants, and to procure an honest livelihood by their own exertionsâ€¦By this arrangement it is not too much to calculate, that, besides producing from the garden a sufficiency for the support of the teachers, one halfpenny per day each, may be averaged by the earning of the children!” 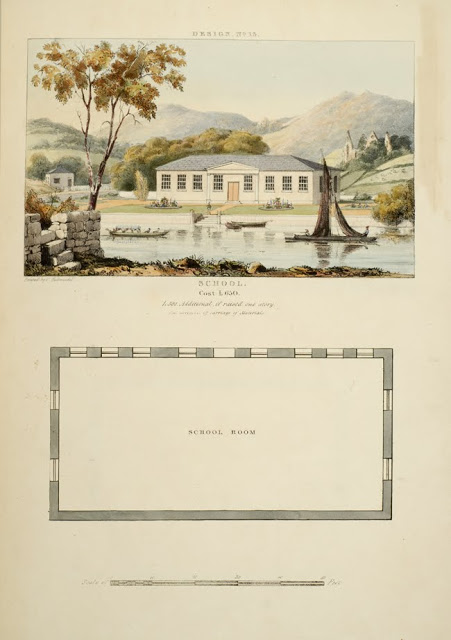 Hall’s project, in its use of inexpensive, natural building materials (timber and PisÃ©, i.e. rammed earth, pisÃ© de terre, an excellent, low environmental impact construction material popularized in the U.S. by S.W. Johnson in his 1806 book, Rural Economy, and now enjoying a renaissance) to construct small one story structures that would be affordable for the working classes and provide a spiritual uplift, was a forecast to Frank Lloyd Wright’s series of Usonian homes developed one hundred and ten years later in the mid-1930s during the depth of the Great Depression in the United States to provide simple, affordable housing for the “common people” while at the same time offering an enlightened living experience. 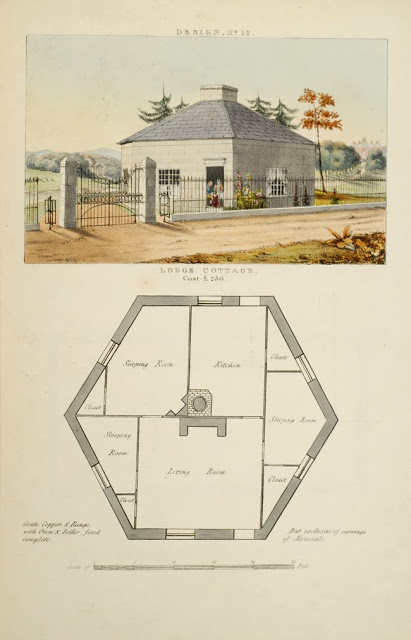 But it was much more than that.

The whole was a dramatic, utopian plan to raise the social, moral and cultural level of the landowner’s tenant labor force and farmers and their families while at the same time offsetting the associated costs and producing a profit. In this, it was a rural foreshadowing of the urban company community-towns of Victorian England, such as the Akroydon model housing scheme in the model village at Boothtown, built in 1859 for the workers at the mills of Edward Akroyd. 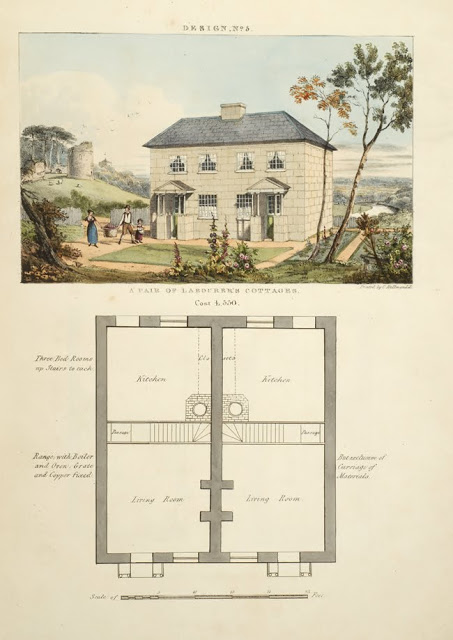 A Pair of Labourer’s Cottages.

Other model villages were built by philanthropist industrialists such as Titus Salt (Saltaire) and George Cadbury to house their workers as well as provide social amenities.

The Cadbury brothers were concerned with the quality of life of their employees and provided housing at low cost for the employees and their families. Their village, opened in 1879, became known as Bournville. There, families rented houses with yards, gardens, and fresh air. The brothers cared for their employees; they both believed in the social rights of the workers. 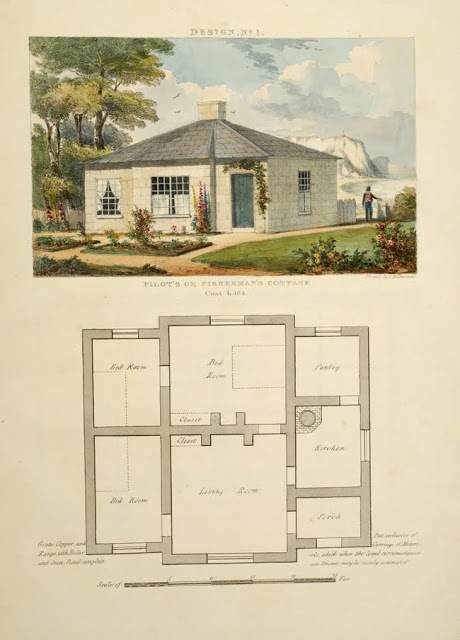 These social labor efforts in Britain in turn influenced the company towns developed in Industrial Age America, providing possible answers to the United Statesâ€™ own social labor questions that would culminate in the promised utopia of George Pullmanâ€™s Pullman, IL.

Developed 1880-1884, â€œto improve relations between management and labor by creating a clean and beautiful community for his workersâ€¦ [Pullman] expected them to respond with hard work, loyalty and improved moral character. 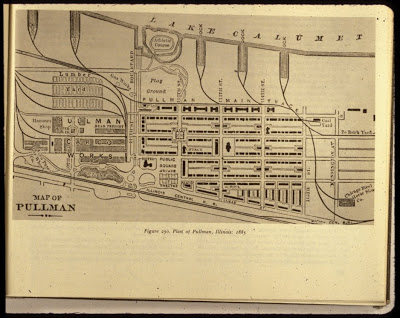 â€œâ€¦The only thing residents lacked was a sense of control. By 1893, the population had reached 12,000. There was no local government. A town agent managed the community. The company decided which stores could locate in the town, which books would be stocked in the library, and which performances could be staged at the local playhouse.

â€œWorker discontent was expressed in an often-quoted saying: â€˜We are born in a Pullman house, fed from the Pullman shops, taught in the Pullman school, catechized in the Pullman Church, and when we die we shall go to the Pullman Hell.â€™â€ (San Diego Union-Tribune. May 15, 2005).

Here, then, in Hallâ€™s designs and plans (but for one school, never realized) we see the genesis of social mercy for the working class in rural England that led to the labor forceâ€™s migration to cities and the progressive social answers to that misery, then crossing the Atlantic, where those answers to labor-management, social justice, and harmony in the industrialized world would be adopted in the United States and lead to Pullmanâ€™s Eden with chains, the result of well-meaning noblesse oblige paternalism taken to its logical extreme to bare the authoritarian actual within the idealistic idyll.
__________

HALL, John. Novel Designs for Cottages, Small Farms & Schools, with Observations theron by John Hall, Secretary to the Society for improving the condition of the Labouring Classes.[ London: Published for the Author], 1825.